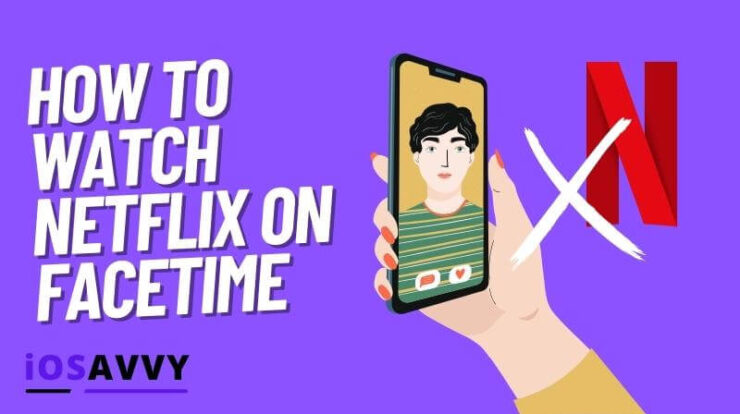 Netflix and FaceTime are two of the most popular apps out there today. But unfortunately you can’t use them together. In this blog post, we’ll explain why how to watch Netflix on FaceTime and the features of SharePlay Netflix do not work together and give you other options to choose from.

Apple launched the iOS 15 with several cool features. The brand finally included SharePlay as a part of the operating system. The SharePlay feature is a great way to spend quality time with your friends and family, even if they’re miles away.

Netflix is one of the most popular streaming apps on the market. So having the ability to SharePlay Netflix and watch it together with friends or family is a great thing.

It’s what we would have say if the option were available, but as of now, SharePlay does not support Netflix, so you will have to use some other streaming app from the list below.

How to Activate SharePlay Netflix / or other streaming app

Firstly, ensure that your Apple device is up-to-date with the recommended software. After that, follow these steps:

NOTE – Everyone on the call that you SharePlay Netflix with them will need to have access to Netflix on their own, otherwise they will not be able to watch the video together. This is true from any other streaming app you use.

While SharePlay might not support Netflix, it is a cool feature of your iPhone. And the list of apps below DO work with SharePlay so give them a try.

The fun and entertaining apps currently supported by SharePlay are:

You can share and have a listening party on SharePlay through these nine apps:

Play these four games with your friends:

Want to get in shape? Do it together using these following six apps:

All the other apps you can use with your friends are:

Why SharePlay Doesn’t work with Netflix

Netflix is one of the few apps that aren’t compatible with SharePlay. The problem is mainly because Netflix is currently not supporting any shared viewing features or experience. This might change in the future, but as of now, they don’t have the technical feature to support SharePlay.

Spotify, YouTube, and Netflix are just a handful of apps that do not work with SharePlay even though these are probably the most popular apps on the market. However, other streaming apps support the function, including Disney+, Hulu, HBO Max, Pluto TV, Paramount+, ESPN+, etc.

SharePlay works almost similarly to other video calling apps like Zoom, Google Meet, or Microsoft Team. It allows sharing your screens over FaceTime and streaming content with your friends and family.

The feature is also helpful in sorting out the difficulties of the iPhone or playing games together. You can also use it for a joint listening session with everyone’s favorite songs.

Does SharePlay work with other apple devices?

Yes! SharePlay does not work with just iPhones. It is a feature that works with other Apple devices like:

However, for SharePlay to work, iPhones, iPads, and Macbooks must have 15.1 iOS, 15.1 iPadOS, and macOS Monterey 12.1, respectively.

How Can I Watch Netflix With Others without using SharePlay?

Do not let the news of SharePlay not working with Netflix get you down! Several apps and extensions will let you share the screen and stream content together regardless of the app being used. Some of them include:

Disclaimer – We did NOT test or tried any of these apps and can’t say if they work well or poorly. We just know they are on the market and offering the feature to share your screen with others.

Teleparty (formerly known as Netflix Party) is a browser extension that works with Google Chrome and Microsoft Edge. It lets you and your friends watch Netflix simultaneously while giving an individual control of the play and pause buttons.

The playback automatically synchronizes for all the watchers and adds a chat box for real-time conversation. Other services like Hulu, HBO, and Disney+ are also supported.

Using the extension is quite easy as well. Simply start the movie or episode, pause, click on the extension, and a session will be created. Everyone involved will just have to join the link. However, it has a downside. The session ends after every play; a new one would have to be created for a new movie or episode.

Kast is an extension that supports all major streaming sites, including Netflix. Its official app can be downloaded on Windows and macOS or used on a web browser. Everyone in the room can watch the show simultaneously, but the controls will be limited to one person.

Metastream is a viable Netflix watching extension for Firefox and Chrome; there are no standalone apps. Other than Netflix, it also supports Hulu, Crunchyroll, Youtube, and Twitch. Along with an in-sync playback, the interface also provides a video queue for continued watching and a chat box.

Watch2gether is a popular screen-sharing app known to be compatible with Youtube, Twitch, Vimeo, and SoundCloud, but not with Netflix. However, the company has launched the beta W2gSync feature. It allows users to paste the Netflix URL link in a unique window of a private room. Everyone inside the room can see the movie or episode, but the controls will only be with the room’s creator.

Frequently Asked Questions about SharePlay Netflix and SharePlay in general

Why Is SharePlay Not Working On My Apple Device?

SharePlay is a wonderful feature that you should definitely not miss out on! If you’re having trouble operating the feature on your Apple device, then it must be because of one of the following reasons:

Ensure that your Apple Device is up to date with the 15.1 version. If the software is below that, update it by going to the device’s Settings – General – Software Update. If it’s available, then click on Download and Install. If you’re using iPhone 6S/SE/7, your device is incompatible with this version so the feature won’t work.

While the iOS update will automatically enable SharePlay, it is best to ensure it is on. Here’s how you do it:
– Go to Settings and open the FaceTime tab.
– Now scroll down to SharePlay and click on it.
– There you’ll see SharePlay with a toggle beside it. If it’s off, turn it on.

Compatibility of the App

As we mentioned before, not all apps are compatible with SharePlay. Using the list of feasible apps, check whether your app made it there or not. Amongst the popular apps, Spotify, Youtube, and Netflix are unavailable.

Netflix is, unfortunately, incompatible with SharePlay. You can, however, stream content from innumerable apps supported by the feature, like Disney+, Hulu, HBO Max, etc.

They have some great movies and series as well! Although, if you want to have a remote ‘Netflix and Chill’ night with your friends, several extensions allow screen sharing with the app.

Hopefully you enjoyed reading this blog and learned how to watch Netflix on Facetime.

FaceTime screenshots not saving
I hate when something I need doesn’t work, here’s how to fix FaceTime Screenshot not working

How to see how long a FaceTime was
Sometimes you talk for hours on the phone and you want to know how long that call was. Here’s how

How to mute someone on FaceTime
Muting is a helpful thing while on FaceTime calls. Here’s a quick guide for it