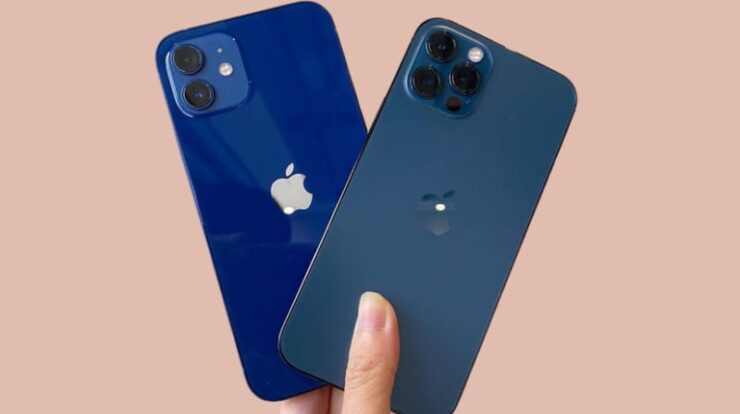 If you’re trying to decide which color iPhone 12 to get, you may be wondering what the difference is between Blue and Pacific Blue. Here’s a breakdown of iPhone 12 Blue vs Pacific Blue to help you decide.

Pacific Blue was the newest addition to the Apple color range when the company launched iPhone 12 and 12 Pro Max. While the color was impressive, it left many users confused. Is it any different than regular blue? Does it cost more and worth the amount?

So what’s the difference between iPhone 12 Blue and Pacific Blue? Regular blue is closer to the blue spectrum with a navy blue or dark blue hue. On the other hand, Pacific blue is a mix of blue and black. So it’s darker than the blue color.

If you’re still confused between blue and regular blue, continue reading. This article will help you decide which color you should invest in.

What shade of blue is the iPhone 12?

iPhone 12 was released in October of 2020. The 6.1-inch smartphone from Apple saw many improvements over its predecessor iPhone 11, including the camera and support for 5G. Along with that, it was made available in six different colors — one of them being blue.

The shade of blue in the iPhone 12 is called navy blue or dark blue. The blue in older iPhone models like the 5c featured light blue colors. But this is darker and looks better. You can compare the colors here.

But bear in mind pacific blue is not available on iPhone 12. It’s only available in iPhone 12 Pro and Pro Max models. Pacific blue is comparatively darker and may not look blueish at all. That is because it belongs to the Green color family.

What colors are available on iPhone 12?

The iPhone has traditionally released the iPhone in multiple colors to offer more choices to consumers. And that’s the case with iPhone 12.

The iPhone 12 is available in six colors. These are:

(PRODUCT)RED is deep red. It’s an effort by Apple to raise funds for HIV-AIDS and COVID-19 programs. Part of the revenue from red-colored devices will go towards research and donation.

White and purple are the two most popular colors among iPhone users. Therefore, they can have great resale value. But given that pacific blue will be limited to iPhone 12, it would be an excellent buy for those who plan to resale down the line.

Is Sierra Blue available on iPhone 12?

Another interesting blue variant released by Apple is Sierra blue. It’s much brighter and a lighter shade of blue. Under certain lighting conditions, it looks similar to graphite.

But unfortunately, Sierra Blue is not available on iPhone 12. It’s made available only for the iPhone 13 lineup. Besides that, there are five other colors: midnight black, pink, starlight silver, alpine green, and (PRODUCT)RED.

When shopping for iPhone 12 in the blue range, you have to choose between blue and pacific blue. So should you buy blue or pacific blue?

So you have to choose between two models and not just two colors. There are differences between the two models, including cost. So you need to make a wiser decision rather than buying based on color.

That being said, blue or pacific blue is a matter of choice. The blue in iPhone 12 is darker and looks like navy blue. Pacific blue is a more greenish type of color. So select a color that looks better to your eyes.

A: Pacific blue is not necessarily better than graphite and vice versa. Graphite resembles a silver color, and pacific blue is like a darker blue. So it’s a matter of preference.

Q3: Sierra blue or pacific blue, which is better?

A: You can find pacific blue cases for your iPhone. But note that cases are not made by Apple but by third-party manufacturers. So colors may vary when you compare it to the pacific blue used in iPhone.

Apple has an uncanny way of impressing consumers with new and exciting colors. And some of them are available for only one model and are replaced with another color in the following product release. Pacific blue is one of those colors.

If you’re still undecided between blue and pacific blue, consider visiting an Apple store and inspecting the colors in hand. It will help you decide better on which iPhone 12 to bring home. We hope you enjoyed reading this article on iPhone 12 Blue vs Pacific Blue.

iPhone12
Was this page helpful?
Thanks for letting us know!