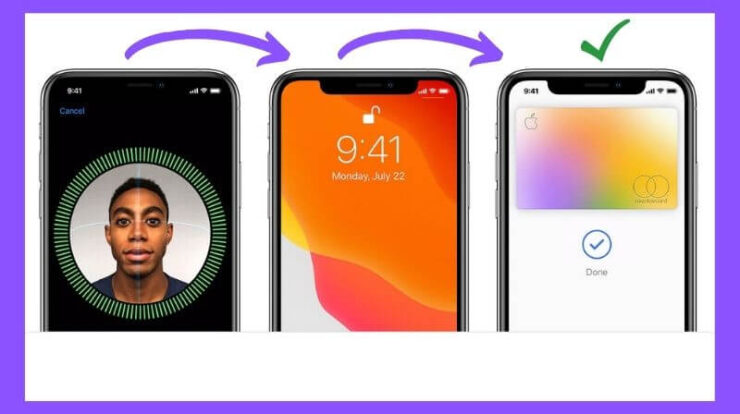 Face ID was introduced to the world with the release of the iPhone X by Apple. It was a game-changer and more secure. But users often ask if they (or someone else) can open the iPhone with their eyes closed.

So does Face ID work with eyes closed? Yes, you can unlock your Apple device with your eyes closed. But it requires you to disable the ‘Require Attention for Face ID’ option in the settings menu. By default, Face ID requires you to pay attention to unlock.

This article explains how you can unlock Face ID with your eyes closed.

Does Face ID Work With Eyes Closed – Why does Face ID require attention to unlock?

As you may know, Apple places great importance on privacy and security. It replaced the Touch ID feature with Face ID to make the devices more secure.

By default, Face ID is designed to unlock only if the user pays attention to the camera. If you’re looking elsewhere or not active, the device will not unlock.

This is just a security mechanism implemented by Apple so that nobody can open the iPhone without their knowledge.

Apple devices use the TrueDepth camera and machine learning algorithm to check if you’re paying attention. Keeping their eyes open is one of the criteria for ensuring that the user is paying attention.

Can you unlock iPhone with your eyes closed?

iPhone will only unlock if you have your eyes open. But there’s one way you can change that.

To unlock your iPhone with your eyes closed, you must disable the ‘Require Attention for Face ID’ feature. It is located in the Settings > Face ID & Passcode section. Scroll down till you see the option in the Attention section.

By disabling this option, the iPhone will no longer require you to look into the camera. You’re granted access if the facial structure matches the one saved in the Secure Enclave.

But the researchers at the Black Hat hacker convention were able to bypass the Face ID with their eyes closed. They used three things: a pair of glasses, a tape, and the sleeping iPhone user.

They found that the Face ID liveness detection process doesn’t extract full 3D data of the area around the eyes if the user is wearing glasses. So they took a spectacle and created a fake eye with black and white tape.

It worked, and the researchers could unlock the iPhone in 120 seconds. Since then, Apple has taken some measures and improved its facial recognition technology. So it’s highly unlikely that you or anyone else would be able to replicate it.

Will Face ID unlock by a picture?

Android phones, especially the cheaper ones, are easily unlocked with a photograph of the user. But is that the case with iPhones too?

When scanning the user, Face ID creates a 3D model of your face that matches against saved depth information. This isn’t possible in a 2D digital photograph. In other words, Face ID is able to distinguish between a real face and a picture. Apple clarified it at a product release event.

So Face ID will not get unlocked by a picture.

Does Face ID work with a mask?

Many Apple users wear masks in public and wonder if Face ID works with the masks on.

Apple has launched a new feature in iOS 15.4 and later allows users to unlock their devices without taking off their masks.

Face ID uses attention-aware protocols to check if the user is conscious and paying attention. So masks, which cover the lower half of your face, don’t matter much as long as you’re paying attention.

To enable this feature, here are the steps to follow:

Now you can unlock your iPhone or iPad by wearing a mask. If it fails, try to unlock it with your mask off.

No, Face ID will not work while you’re asleep. Face ID requires you to pay attention and look into the camera to unlock. It also scans and detects your face for attentiveness. Since you’d be unconscious while asleep, it would not unlock.

Does Face ID work with a 3d printed face mask?

However, there have been cases where researchers were able to bypass Face ID using 3d printed masks. So it depends.

Can Face ID work with a video of you?

No, Face ID will not open with a video of yours. The way Face ID works is it creates a 3d image of you by projecting thousands of dots on your face. That wouldn’t be possible on a screen. So Face ID will fail.

Is Apple Face ID safe for the eyes?

Yes, Face ID is safe for your eyes. The IR light it uses is not that intense to harm the eyes. Also, the rays aren’t concentrated on the eyes but spread across the entire face. Furthermore, the duration is only a few seconds, which again is insignificant. All of this makes Face ID technology pretty safe for eyes even in the long term.

About the Author: Alice Bahn

Alice has joined the team after years as an avid apple fan and user, from macs, iPhones to the watch and airpods you know she has and used all the devices and became an expert in the field.